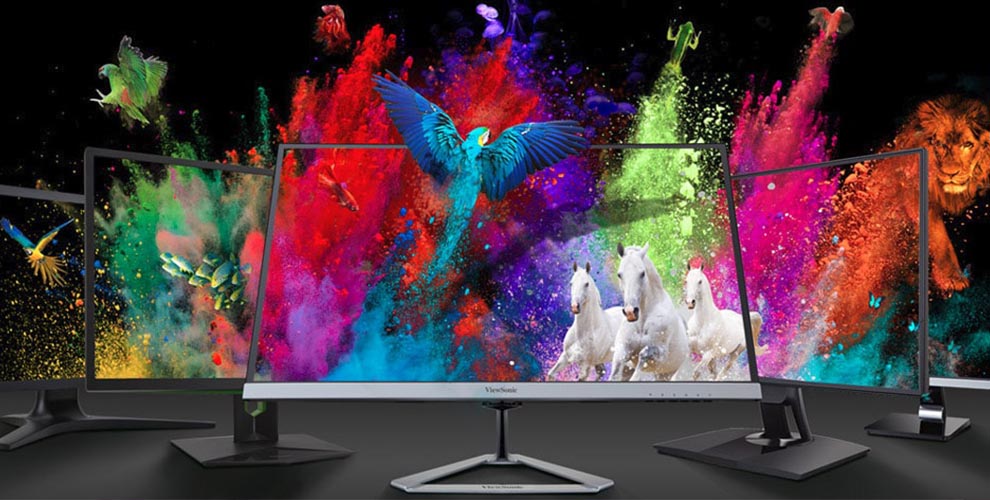 We looked at a selection of the best IPS monitors available for less than $200. It was hard to pick a clear winner since gaming and non-gaming applications require very different features but the Sceptre 4K model offers an impressive range of features, including a nod or two to gamers, for a competitive price.

Let’s have a look at the competition, in our round-up of best IPS monitors under $200.

Before we start, a bit of science. IPS stands for In-Plane Switching. This means that the liquid crystals in the display are arranged and switched within the plane of the screen in such a way that the image quality is optimized. This means the picture is just as good when viewed from an oblique angle (up to a certain limit) as it is when viewed straight on.

IPS Monitors Under $200 We Recommend

What we like: Affordability, good adjustability, excellent color reproduction

Not so much: Lack of I/O connections, poor response time

Best for: Using in a two-monitor set-up for graphic/design applications

This is our 24″ pick for the best IPS monitor under $200. This model boasts a 100% sRGB color space with a good contrast ratio (1000:1) and a decent refresh rate of 75Hz, which will help reduce image blur in non-gaming applications. The ProArt is a little lacking in input/outputs with one HDMI and one Mini DisplayPort 1.2 connection. The monitor can be desk or wall-mounted and comes with an adjustable stand with three degrees of movement (height, tilt, swivel). The color-space can be switched between standard, sRGB, and R-709.

As its name might suggest, the ProArt is intended as a monitor for those who work with images or video. It reproduces colors across a wide dynamic range (colorspace). As a gaming machine, it might not be ideal, however. Its refresh rate (75Hz) and response time (5 ms) are both probably too slow to avoid motion blur in gaming.

It comes with two reasonably good 2.5W stereo speakers. The monitor is small and square enough to be paired with another without crowding your wall or worktop.

What we like: Its thinness, the LED backlight, full HD resolution, and price

Not so much: Can’t easily be wall-mounted, slow response rate, no speakers

The Dell is an FHD monitor, which boasts an LED backlight. LEDs are more energy-efficient and provide improved color and brightness. They also make this model considerably thinner than some other models, a distinct advantage if you plan to wall-mount it or use it on a shallow desk. It has HDMI and VGA input/outputs and a standard refresh rate of 60 Hz. This too would not be an ideal gaming monitor.

This model has a switchable response rate of 5 ms or 8 ms. The slower response rate should be used for static graphic applications such as Photoshop and the faster rate for video (or games). It’s still small enough to use in a two-screen set-up if you have enough desk space but note that it does not fit a standard VESA wall mount.

As a general-purpose IPS monitor at a reasonable price (under $200) , this is a good bet and at less than 1.8 inches thick, it is discreet and space-efficient. It does not come with built-in speakers, unlike the Asus. However, it is very reasonably priced compared to competitors with similar specs.

What we like: Style, range of inputs, and user-friendly settings

Not so much: Non-ergonomic unless wall-mounted, limited colorspace

If you want to take it up a notch in terms of screen size, the 32 inch ViewSonic might be a great budget choice. Like the Dell, it’s an FHD monitor. Unlike Dell it has HDMI, VGA, and DisplayPort inputs, giving maximum flexibility.

The ViewSonic comes with a suite of built-in software and settings, including five display “modes” – game, movie, web, text, and mono, which should help optimize its performance, depending on what you’re using your computer for at any given time. It has built-in eyecare technology including reduced blue light and flicker. It also comes with built-in stereo speakers

It is a very sleek design with a frameless bezel and ultra-thin screen, although the unique triangular stand and hardware add a fair bit of width to the overall footprint. It’s certainly one of the best-looking monitors in this round-up. It has a straightforward RGB colorspace and only one degree of movement (tilt) but it can also be wall-mounted.

In one technical respect, it shines – as a full LED monitor it boasts a 1200:1 contrast ratio, making it good for entertainment, despite its comparatively slow response time.

This stylish monitor would suit a well-equipped office or home set-up but it isn’t especially high-spec or flexible.

What we like: 4K resolution, gaming modes, variety of inputs

Not so much: Comparatively low refresh and response rates, average color reproduction

Best for: 4K on a budget

If you’re working in 4K resolution, or you want to watch movies at the highest quality affordable within this price bracket, the Sceptre 4K monitor is a great choice. It has a variable refresh rate up to 70Hz (using the DisplayPort input) or 60Hz through an HDMI connector. The improved image quality of 4K and improved refresh rate should help minimize eye strain, as will the built-in reduced blue light and flicker technology.

The 4K has a couple of integrated settings for gaming – FPS (first-person shooter) and RTS (real-time strategy). However, gamers are demanding and with a 5-millisecond response rate and a 70Hz refresh rate, this monitor might under-perform on the fastest 4K games.

However, as a work machine with a capacity for 4K images, this monitor would be great for the amateur filmmaker or photographer, for instance. Its 8-bit color system might not quite be up to professional standards, but it would outperform a lower resolution screen.

This 4K IPS monitor under $200 has built-in speakers and audio out for headphones or external speakers. It can be wall-mounted and comes with a fully-adjustable stand. Despite its limitations, if you want 4K resolution on a budget, the Sceptre is still offering great value and functionality.

What we like: Super-fast response rate and game-specific technology

Not so much: Low refresh rate for a gaming machine, inflexible stand, no DisplayPort input

Best For: Gaming on a budget

It may not be the largest screen or the highest resolution model I looked at, but the Acer Nitro has a selection of features that make this a superior under $200 IPS gaming monitor.

Firstly, it has a 75Hz refresh rate which, although slow for a gaming machine, should help minimize image blur and ghosting. Secondly, it has a 1-millisecond response rate, which is exceptionally fast, and great for first-person shooter games. Lastly, and most innovative, it features something called AMD Radeon Freesync. Put simply, this synchronizes the frames of the monitor with your computer’s graphics card, eliminating stuttering and tearing (accidental defects in image quality).

The Acer Nitro is an HD monitor with built-in 2W speakers. Like the ViewSonic, it has multiple modes (8), which optimize performance for different game styles and other uses. Its stand has limited flexibility but the monitor can also be wall-mounted. If you’re a gamer on a budget, this could be a clever investment.

What we like: User-friendly controls and some gaming features, stylish design

Not so much: Lack of speakers and inputs, inflexible stand

Best for: A good game-friendly all-rounder

Like the Acer Nitro, the LG also has Radeon Freesync technology as well as a 75Hz refresh rate, which makes it a reasonable choice for gamers. Its ultra-thin bezel makes it a stylish and immersive monitor for entertainment too.

It has a highly user-friendly set of onscreen controls, which means no frustrating fiddling with tiny buttons to summon the menus. To help combat eye-strain, it has a text reader view which reduces harmful blue light. It can be wall-mounted but its stand only tilts and has no built-in speakers. It is also limited in inputs, having just a single HDMI slot. This is a shame, as a VGA or DisplayPort connector would have bumped the specs of the LG up a notch.

Without an LED backlight, this LCD monitor may not have the best contrast ratio or colorspace, but its low price and flexibility make it a choice worth considering.

For under $200 there will always be a trade-off between factors like response and refresh rate, resolution and colorspace (the range of color the monitor can display). In other words, you won’t get excellence in all of these areas at once, at this price point in an IPS display.

You need to ask what you are most commonly going to use the monitor for, whether that’s movies, gaming, video conferencing, visual work, or document reading. This will help your prioritize which factors are most important. If you are a gamer, then response and refresh rate will be key, as well as any gaming-specific features like Radeon Freesync.

If you are a designer or photographer, you might opt for a model with a wider colorspace, a better contrast ratio and higher resolution. For movies, larges screen size and 4K resolution might be key, as well as decent speakers, or audio outputs to add them.

For general users, you might want a model that offers a bit of everything, with medium specs but a lot of flexibility.

The simplest answer I can give to this question is to say that you can always find something that works for you, but you’ll want to look closely at the specifications and limitations of each model.

What does IPS mean in monitors?

It is simply a system for switching the plane of the crystals in the display so that the screen has a wider usable viewing angle and a more consistently good image across all parts of the display.

Is IPS better than LCD?

IPS is a specific type of LCD monitor. LCD screens that have IPS technology built-in are better for sharing with multiple viewers at once and have more accurate color reproduction. So, yes, IPS monitors are generally better than those that do not use this technology.

Is IPS good for the eyes?

In the sense that these screens offer better contrast, color reproduction and viewing angles, yes, there is probably a small advantage to choosing this type of screen. If this is a major concern, you should also look for features that reduce blue light, flicker, and glare, which can be found in both IPS and non-IPS monitors.