Every complete self-contained stereo, tv, and car audio system is likely to have an integrated amplifier within it, but, let’s delve deeper into exactly what it is so you can make an informed decision when looking to make a purchase for your HiFi setup. 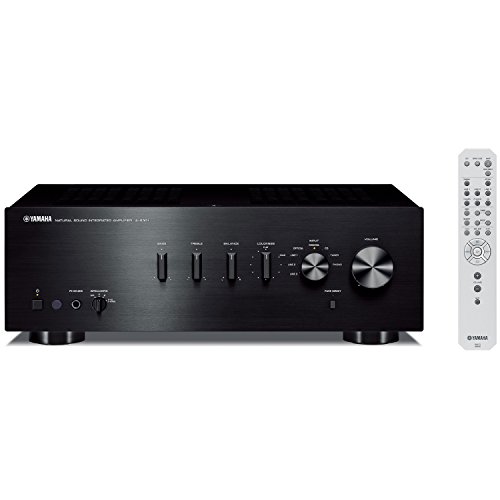 The build quality is also of a high standard. It feels and looks like it could be a much more expensive unit. 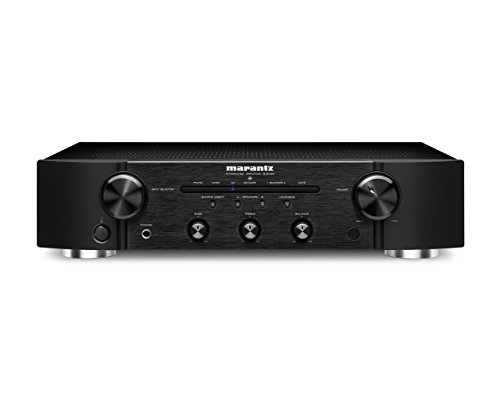 Marantz stereo amplifiers (like Marantz PM5005) use a unique module on their amplifiers that they call the Hyper Dynamic Amplifier Module which when coupled with quality current feedback architecture provides the tone associated with the brand.

This type of design allows accurate and fast response while creating a wide-open soundstage. This can be maintained while driving speakers hard or at low volumes with minimal disruption to the sound in either case. 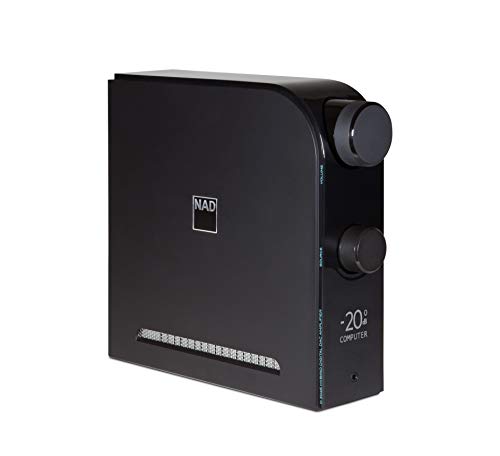 The NAD D 3045 is similar in design and sound quality to the rest of the D series of amplifiers from NAD with a more dynamic power stage than the D 3020 V2 while also looking a bit more premium with its small packaging than the less powerful offering from NAD.

This is a high-quality amplifier with a built-in DAC that is perfect for use with your computer but with its array of inputs and outputs, you will find yourself using it for many other purposes too.

All Sonos amplifiers come with CD quality as its upper limit of sound quality as the company seems to shunt the idea of providing compatibility for hi-res music.

However, Sonos offers streaming compatibility that is broader than any other amplifier manufacturer. The Sonos app also makes the Sonos Amp (review) a perfect addition to a hi-fi system that could potentially cover every room in your house.

If you are considering purchasing a Sonos Playbase or Playbar for home theatre use already, we would highly recommend purchasing the Sonos Amp and a pair of quality speakers as well. This will provide more capabilities and a higher-quality listening experience. 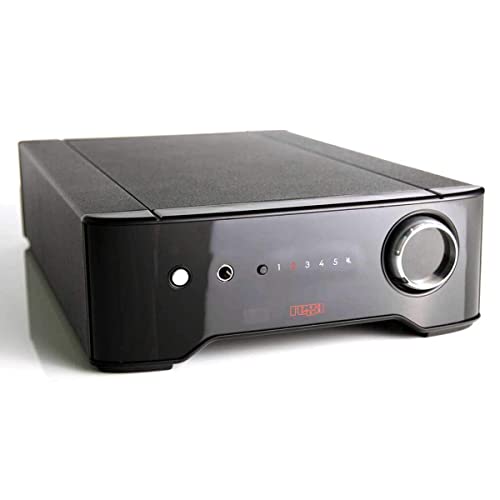 The first Rega Brio launched in 1991 and has a long history of winning awards and the hearts of its customers.

Each new release has made improvements upon the previous model and the newest of these is no exception.

You can expect a solid build, quality sound, and an array of features included which the Rega Brio delivers. 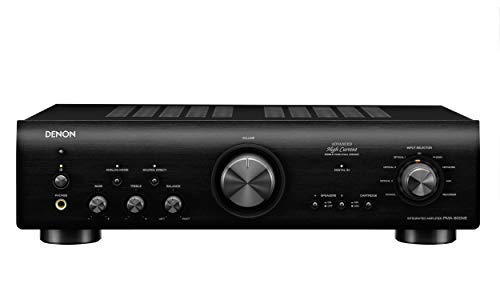 If having a brand new matching full set up is important to you then the 800NE series could be perfect for you as the Denon PMA-800NE (review) can be purchased with its matched network audio and CD player.

Conversely, The PMA-800NE is also an excellent choice for upgrading your existing setup as it is not phased by being paired with an incredibly broad range of speakers or other hi-fi gear. If your looking for some serious amps be sure to check out reviews of the top under $2000 and $3000.

What is an integrated stereo amplifier?

An integrated stereo amplifier can come with many different features, inputs, and outputs and it is important to figure out what would best suit your needs.

An integrated stereo amplifier is a combination of what is known as a preamplifier and a power amplifier and you can think of it as the link between your music sources such as a CD player, DAC, or turntable and your speakers. You will need an integrated amplifier to provide input switching and to boost the signal to your speakers to drive them hard enough to create sound.

Integrated vs. Preamplifier vs. Power amp

As mentioned earlier, an integrated amplifier is simply a combination of a preamplifier and a power amp into one package. Most stereo amplifiers you find now are integrated and you would be unlikely to find a preamp and power amp as separate units in a home setting although it is still possible. The signal from the input source to the speakers would follow the subsequent chain.

Preamplifier – You will often see a preamplifier referred to as a preamp or pre. Its job is to convert the weak electrical signal from the input source such as a turntable and make it strong and noise resistant enough to be sent to the power amplifier for further processing. Without the preamp, the signal would be extremely noisy and/or distorted.

You can think of the preamp as the input section of an integrated amp. Sometimes there is also an output to be used with a subwoofer on amplifiers. These bypass the power amp in the integrated amplifier as many subs have their own power amp contained within their speaker boxes.

The terms stereo amp and receiver are used pretty interchangeably when talking about home HiFi and they do share some qualities and in many cases, one particular stereo amp is a receiver and visa versa but this is not always the case and there are important differences to watch out for when making a purchase.

AV receivers offer convenience in one package while a stereo amplifier has the ability to be paired with a range of separate components. This allows you to purchase better separates for HiFi systems such as a high-quality DAC or a primo tuner. An AV receiver may not have an amplifier built-in and may need a separate amp.

When searching for the perfect integrated amplifier, one of the specs that comes up a lot is the inputs. There are two categories of inputs which are analog and digital. These two categories cover a range of different connections such as:

Analog inputs are used for connecting sources that have an analog signal such as a turntable. You can also connect things like a computer or phone to an analog input but the audio will have already been processed from digital to analog by that device before passing to the amplifier.

Digital inputs are capable of accepting a digital source directly this is beneficial as the onboard decoding from your amplifier should be of better quality than from whatever device the source is. Integrated amps with digital inputs are generally better for streaming and playing digital sources of music such as FLAKK, DSD, and MP3.

Power: What to look for?

The most common amplifier classes range from Class A to Class D. In simple terms, Class A is the least energy-efficient and Class D is the most efficient. However, this comes as the cost of distortion but most amplifiers have ways to cancel this out.

Class A powers the input and output stages to full power constantly while switched on so they offer the least distortion but use a lot of power.

Class B is similar to Class A but only powers one of the output stages at a time.

Class A/B take is a hybrid of Class A and B and is one of the most common types of amplification as it takes the always-on output stages of Class A but cycles the output between the two of them for similar listening as a Class A amp but with more efficiency.

Class D uses transistors to limit the current to pulses and uses a number of different methods to smooth the pulses back to an analog signal.

Bi-amping is the practice of using two amplifiers to power different sections of one speaker such as the woofer and the tweeter. It can be done using a single amplifier in some cases if it has cross over controls for its outputs or can be done using two amplifiers. Certain frequencies will be pathed to the appropriate speaker driver ie the high frequencies to the tweeter and mids to the woofer.

How to Connect an Integrated Amplifier to AV Receiver

When connecting a receiver to an integrated amp you should check that the receiver has pre-outs that bypass the power stage if it has one. If all is easy enough you can use the pre-out RCA plug from your receiver and plug it straight into an RCA plug on your stereo amplifier.

This will hopefully bypass the volume controls from your stereo amp so the receiver is still in control of the volume and tonal character. Some amplifier brands may not have an AV input label and could be labeled something like “main” or “direct” etc.

How to Bridge a Stereo Amplifier to Mono?

A bridged amplifier uses its two stereo outputs to power a single speaker. This allows a higher output into that single speaker by using the power from both channels into one.

Make sure your amplifier is compatible with bridging and is switched off and that your speaker is capable of accepting the bridged load as the impedance will double( ie 4ohms will become 8ohms).

How to Connect iPhone to a Stereo Amplifier?

There is a huge number of ways to do this depending on the connections that your amplifier has. Some amplifiers with digital music features use Bluetooth and you could just pair your iPhone with the amplifier. You could also use a USB C to USB A or B cable to plug directly into the amplifier in some cases. Some amps without digital features may need a standalone DAC with these inputs to achieve this.

For analog amplifiers, you could also use the USB C to 3.5mm adaptor into a 3.5mm to RCA cable to plug into the amplifier or if you’re using an older iPhone and an amplifier with a 3.5mm input you could just use a classic AUX cable.

*Cyberpunkist.com is a participant in the Amazon Services LLC Associates Program, an affiliate advertising program designed to provide a means for sites to earn advertising fees by advertising and linking to (amazon.com, or endless.com, MYHABIT.com, SmallParts.com, or AmazonWireless.com). *As an Amazon Associate I earn from qualifying purchases. *Amazon and the Amazon logo are trademarks of Amazon.com, Inc. or its affiliates.