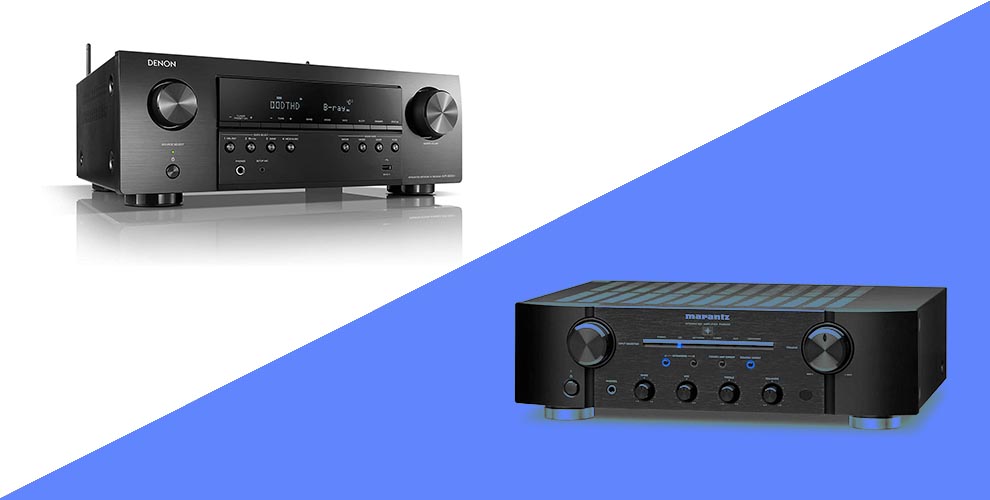 Denon and Marantz are both HiFi heavyweight brands that hail from Japan. Marantz began its life in 1950’s New York but has now moved its operations to Japan too. Denon is equally as iconic in the stereo industry and you could consider these brands as “sister brands” as they both use the HEOS platform for their connectivity and are therefore compatible with each other.

We have compiled some comparisons between some of these two tech giants’ products to help you pick which brand suits you the best. You can see also Denon receivers compared to Yamaha, Marantz vs Yamaha.

If you already own a standalone DAC and are after a mellow presentation then the Marantz is likely to be the appropriate choice for you. However, the Denon PMA-800NE has digital music capabilities out of the box and is a better option for those who like a more energetic listening experience.

Both of these brands build a number of integrated amplifiers with different features and power outputs. We have done our best to find the equivalent amp from the opposing brand to make a fair comparison. The first of these comparisons is the Denon PMA-800NE vs the Marantz PM5005.

As you would expect from bands with a long history of quality products these amplifiers have excellent build quality in terms of sturdiness and interior component placement.

The Marantz amp has symmetrical knobs at the front on the left and right that control the volume and input selection whereas the Denon amplifier has one large central control for the volume and a smaller knob to the right for input selection. Both amplifiers also have controls for bass treble and balance on the face of the unit. They look great and it is really a matter of preference in terms of build.

Some awesome features that these amplifiers share are A/B speaker switching, auto-off, and phono stage inputs. These additions are not always included in integrated amps at this price point which makes them great inclusions. These amplifiers are also both parts of matching sets of component HiFi gear.

One dividing feature between these two amplifiers is digital processing. The Marantz amplifier is an analog-only amplifier and is, therefore, missing digital inputs such as coaxial and optical. This also means the Denon amplifier is the only one that has a built-in DAC which is an important consideration if you intend to use these amps for digital sources you will have to purchase a standalone DAC for the Marantz.

The Marantz amp has 1 extra analog input and an extra record through making it more suitable for use with more analog sources.

You can expect these amplifiers to outperform many others at their price point in terms of providing an immersive soundstage and clear presentation. The Denon is a little more powerful @50w per channel into 8ohms. The Marantz amp is rated at 40w per channel.

The Denon is perhaps a little brighter than the Marantz while the latter has a more mellow output. The Denon also has the bonus of being more bass responsive as it can reach frequencies of 20hz whereas the Marantz can only get down to 40hz most listeners would not notice the difference but if you’re a real bass junkie it is something to keep in mind.

Both of these integrated amplifiers are incredible and are very unlikely to disappoint even the pickiest listener. The Denon amplifier has a few additional features but is also close to 50% more expensive. So you have to decide if the extra features are worth the extra spend.

If we move up the ladder on cost and features of offerings from these two brands in their integrated amplifier departments we will reach the PMA-1600NE from Denon and the Marantz PM7000N. These amplifiers offer us a lot more than their smaller counterparts so let’s get into the comparison.

These amplifiers still really look like they belong to the same family as the smaller amps. The Marantz now has a decent sized, multipurpose screen added though whereas the Denon amp has a smaller screen that just displays the input. You can use the basic controls on these amps but you’ll likely not need them as you can use included remotes or the HEOS app.

Both of these amplifiers are capable of streaming through the HEOS platform which can be used from an application on your smart device. These amplifiers also both have fantastic DACs built into them with compatibility for DSD streaming. There are ample inputs on both amplifiers too including phono RCA inputs.

Some features present in the Denon offering that are lacking in the Marantz are jitter reduction and A/B speaker switching, these are premium features that are reflected in the extra cost of this amplifier.

The PM7000N has the far-reaching and spacious sonic character you would expect from a premium amplifier. It also respects dynamics when listening to complex rhythms, maintaining clarity and accuracy.

The PMA-1600NE has an incredibly clean signal and accompanying neutral and spacious tone. It is arguably more sparkling in the upper frequencies than its competing amplifier but this could be considered a taste element.

Not So Much: Expensive when compared to Marantz

Verdict: A premium HiFi product that delivers on its price tags assumptions. A great option for those with a decent budget but not big enough to buy high ticket single components separately.

What We Like: Spacious soundscape, DSD compatibility, Ample connections

Not So Much: No A/B speaker switching

Verdict: This offering from Marantz has distinguished sound with the excellent build quality and is a fair bit cheaper than the Denon. It is a good choice if you can forgo a few extra features.

Verdict
The extra features on the Marantz may be a real selling point for some but many users have no need for those features in which case choosing between these two will come down to aesthetic choices and listening preferences.

An all-inclusive option for your home listening could be either of these options of a 7.2 channel AV receiver. These amps have a few unifying features as well as some that set them apart from each other.

Once again it is difficult to distinguish major differences in build quality with these two amplifiers as both displays the quality manufacturing you would expect from these Japanese retailers. Both have a USB and HDMI input on the front accompanied by many control buttons/knobs and a dedicated headphone out.

The main feature binding these two amplifiers is of course access to the HEOS platform but they also share many other beneficial features. One such feature is Dolby Atmos compatibility which makes them great for home theatre use. They also have DSD compatibility and natural access to all the major streaming platforms.

It is the Marantz that comes with extra features in this battle. Some of those features include bi-amp compatibility, A/B speaker switching, and analog to HDMI upconversion.

The Marantz amplifier is a little more powerful with a rating of 100w per channel 8ohms when compared to 90w on the Denon.
Of course, the sound is excellent through either amplifier and comes down to your particular tastes. The Dolby compatibility means you get great surround sound and thunderous lows from these amps.

The Marantz sounds spacious and sparkly while listening to acoustic tracks and it’s hard to imagine that it also delivers on more complex tracks but it does so while maintaining clarity and drive. The Denon has a more naturally flat eq that remains true to its source.

Not So Much: Small display

Verdict: An awesome integrated amp that delivers an engaging sound and has enough features to impress almost anyone.

Onkyo vs Marantz [A Comparison of AV Receivers]

What We Like: HEOS compatibility, USB DSD, Natural tone

Not So Much: No A/B speaker switching

Verdict: Although this amp has a few fewer features than the Marantz amplifier they are unimportant to many users and this amp could provide a better listening experience for those who like a neutral tone.

Verdict
If one of your main purposes for having a receiver is to stream music through Bluetooth it is worth considering that the Marantz does have a new version of Bluetooth and will, therefore, be more reliable and faster.

The Denon does a little extra detail to surround sound while being used for home theatre or for listening to live recordings. Either one of these amps is capable of providing an engaging soundscape.

Now for the big dogs. The 9.2 channel AV receivers from both of these brands are beasts in terms of features and are also reasonably powerful. They would have no trouble filling most rooms with crystal clear mids and highs and thunderous lows when paired with quality speakers.

Both amps look simpler than their smaller models as they have a panel to hide the front connections and buttons. The Marantz maintains the small circular display while the Denon has the traditional box-shaped large screen that takes up a large chunk of the amplifier’s face.

Needless to say by now that both brands offer a fantastic durable build that does not feel or look cheap. These amps also have exemplary interiors to prevent and excessive noise in their signal paths

These amplifiers have all the features of their smaller 7.2 units such as Dolby Atmos and DTS compatibility for home theatre use. They both have access to Apple Airplay and Amazon Alexa to use with their inbuilt HEOS networking system. Neither system includes Chromecast capabilities but this can be added by USB to either receiver. They are still compatible with all the major streaming services out of the box and have DSD compatibility when available from those services.

The Denon has a few features lacking in the Marantz. One of these features is ‘Auro 3D with Auro-Matic Upmixer’ this further enhances surround sound on older titles and is useful for watching upscaled DVDs etc. It also includes Bass Sync to tighten up the bass when watching films.

The Marantz includes Atmos Height virtualization which helps to make certain sounds feel like they are coming from higher than the speakers. It also features a newer version of Bluetooth (4.1) compared to the Denon’s Bluetooth 3.

The Denon AVR-X4500H has particularly punchy dynamics and an expressive tone. The bass will knock you into your chair and hold you there if you have the volume pumped up. That’s not to say you miss out on any of the intricacies of the other frequencies.

The Marantz is also capable of this dominating bass coupled with near flawless timing and snappy dynamics. You can hear the clarity in dialogue in movies as well as in tracks with a lot of space in them while listening to music.

What We Like: Newer Bluetooth, Great clarity, So. many. connections!

Not So Much: No Bass Sync

Verdict: An AV receiver that does not disappoint on features or sound and is an absolute monster when it comes to connections.

What We Like: Intricate sound, Great upscaling capabilities, Awesome compatibility

Not So Much: An older version of Bluetooth

Verdict: This receiver is perfect for a large room when paired with quality speakers can provide cinema-like sound while maintaining easy listening for music too.