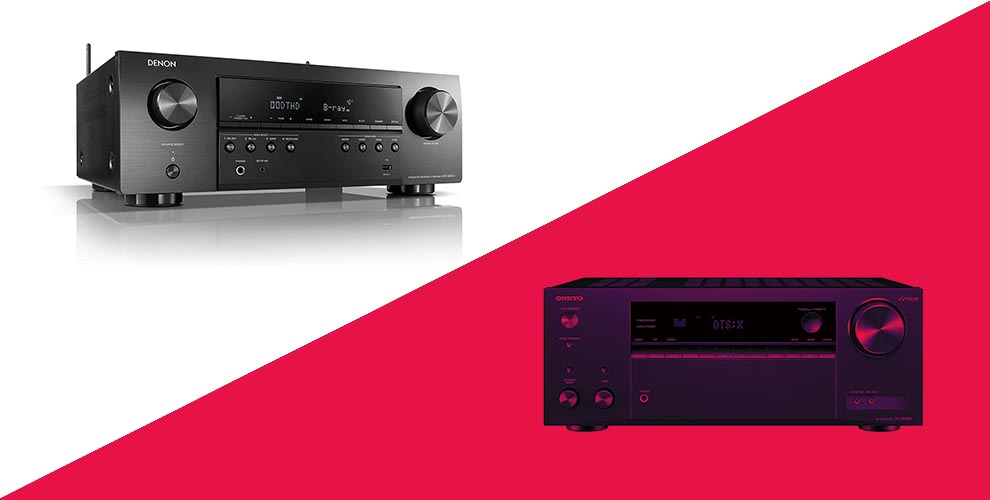 Picking new audio products can be daunting with the costs involved and the huge variety of items available. We have taken two of the big names in HiFi and written a comparison of their AV receivers and stereo systems so you can make an informed choice and find the item that fits your needs.

Onkyo and Denon are both producers of high-quality equipment so let’s delve into the good, the bad, and the in-between of what they have to offer. We also confronted the most popular Denon and Yamaha receivers. Also Onkyo vs Yamaha and Onkyo vs Marantz.

Both of these amplifiers are very feature-rich with quality sound and would make a great addition to your HiFi setup, it really depends on your individual needs.

If you’d like a slightly more powerful amp that is equipped for turntable listening then you would probably prefer the Denon receiver but if you are after something with more inputs and jitter reduction, the Onkyo is probably the choice for you.

A 5.1 channel receiver is probably the most common ratio setup for most home settings, so it’s only natural that this is the first comparison we are going to make. In this case, its the Onkyo TX-SR393 up against the Denon AVR-S650H

Both of these have a brushed black faceplate and a large control knob on the front of the receiver. If you are happy with the look of one of these then it is likely you will also be happy with the other. They are also equally solidly built.

This pair of receivers have extra inputs on the front, although the Denon receiver only has USB input while the Onkyo has USB and an AUX RCA input. Most of the buttons on the front of the Onkyo are more traditional bars which are likely easier to press than the small buttons on the Denon receiver if you have large fingers. The source selection is controlled by a knob on the Denon.

Let’s start with the quality features that both of these amplifiers have in common. They both have access to DSD playback for high-resolution music streaming and Dolby ProLogic for home theatre use. They both use digital inputs inclusive of USB, Bluetooth, HDMI, optical, and coaxial and a few analog inputs too.

Here are some features that are available on the Onkyo TX-SR393 that the AVR-650H is missing:

Here are some of the features that the Denon AVR-650H has that are lacking in the TX-SR393.

The sound from both these amplifiers is superb and you can expect a wide soundstage with ease through the driven frequencies from both receivers. The Onkyo system does have some slight disadvantages for digital listening with a lower compatible DSD sampling rate, and a lower sampling rate through USB (96kHz and 192kHz). The Denon also has a more powerful amplifier which is 75w @8ohms compared to 65w in the Onkyo.

Verdict
The Onkyo snips it for detail and clarity over the offering from Denon but the AVR-S940H has a bouncier and more energetic feel. Both of these receivers will blow your socks off for home theatre use and will provide more than an acceptable experience for digital music streaming and analog listening.

The next comparison we are going to make between the 7.2 channel offerings from these two titanic companies. It is even harder to make a decision between these two receivers as some of the features that one unit had that the other was missing in the 5.1 models are now available from both brands.

The build of the Denon AVR-S940H is very similar to the 5.1 channel AVR-650H only with the addition of a front HDMI input to accompany the USB input. However, the Onkyo TX-NR585 has actually taken away the extra inputs from the smaller model and replaced them with a single 3.5mm AUX input.

They have also added “listening mode” and tone control knobs. This makes it easier to control your listening experience which we think makes the build of this unit a little more functional but if you connect and disconnect inputs a lot then the Denon would be better suited for you.

The Onkyo unit now includes a phono stage and Denon has added component video inputs to this model. These were features missing from the smaller 5.1 channel models from either brand. They both include DSD compatibility, Bluetooth, WiFi, and ethernet connectivity for networking.

Onkyo is still the brand with the most inputs though so if you’re connecting a lot of gear it is the smart choice. Both units have built-in Airplay support. The Denon is compatible with Alexa while the Onkyo has Chromecast capabilities with no add on so this could impact your decision depending on which assistant you already use.

The Onkyo provides a balanced easy listening sound with shimmering treble and thunderous bass while listening to music, but, really shines when being used for home theatre. The Denon receiver shares this inclination to be more suited to home theatre use and has a more energetic but less detailed presentation while listening to music. The Denon has a more adequate power stage of 90w @8ohms when compared to the Onkyo’s 80w.

What We Like: Ample inputs, Clear and detailed sound, Easily accessible tone controls

Not So Much: Only one front input

Verdict: An overall fantastic AV receiver with more than enough connectivity for most users and great sound to boot.

What We Like: More powerful, Front-facing HDMI input, Bouncy presentation

Not So Much: Fewer connections

Verdict: A perfect receiver if you like your listening to feel energetic and with more than enough power to make for a thunderous home theatre amplifier.

With the lack of wireless connectivity, it is hard to recommend the Onkyo over the Denon even if there are more wired connections. The Denon still has more than enough connections for your average user.

The power difference is negligible for most rooms too as you would be unlikely to crank either of these receivers to their full volume under normal circumstances. The Denon also has more home theatre features making it more suitable for that type of application

These are the big contenders for these brands with added features and certifications from both companies to accompany more speaker outputs and stronger power stages for the amplifiers.

These receivers are still two big black boxes with the Denon still looking very similar to its equivalent smaller models. The Onkyo is also similar but is in a larger box to account for the extra heat produced, so the Denon is better suited for smaller spaces. The finish on the Onkyo receiver is darker with a green and red display and maintains its classic bar-shaped buttons whereas the Denon has a simplified front with extra controls hidden beneath a panel.

Disappointingly the Onkyo TX-NR3010 does not have built-in WiFi or Bluetooth. They can easily be added via USB but we believe it is a serious let down when comparing these two models.
The Onkyo has more inputs again so is still the brand of choice when you have a lot of wired connections to make. It is also more powerful with a rating of 140w @8ohms compared to the Denons 125w.

Both manufacturers have upped their game when it comes to home theatre playback with these models. The Denon receiver has support for Dolby Atmos, Dolby Vision, DTS, Dialogue lift, and is IMAX enhanced. The Onkyo has THX certification for Ultra2 Plus and Dolby Pro Logic. If that doesn’t mean anything to you, you could think of the Denon having a more booming output but the Onkyo having better surround sound capabilities.

What We Like: Great rumbling bass response, Heaps of inputs, More powerful than the Denon

Not So Much: No built-in WiFi or Bluetooth

Verdict: A solid AV receiver if you have no intention to use with wireless connectivity or are happy to pay for the separate USB attachments

Onkyo vs Marantz [A Comparison of AV Receivers]

What We Like: Feature-rich, Great sound, Simple and easy design

Not So Much: Less powerful than the Onkyo

Verdict: This amp leaves the Onkyo offering in the dust in its features but is a less powerful amplifier for those of you that might have a very large space to fill with sound.

The DM-41 may have a slight edge in its sound quality but it is also more expensive and less sleek looking than its competitor. Either one of these stereos would make a great addition to a small apartment with a budget-conscious owner.

These small stereo systems are a great all-round option for the budget-conscious shopper. They both prove that, in terms of cost to quality, sometimes you don’t need to buy all your components separately.

Looking at the central control unit of these stereo systems, they are both roughly the same size with the Onkyo having rounded edges while the Denon unit is boxier. There are more controls on the Denon with a play, pause, stop etc buttons on the front.

The Onkyo has fewer controls but this makes it look less busy. This amplifier also has a USB input at the front of it to access your devices. The paired speakers for both of these stereos are solidly built and look great although the Onkyo speakers are a little plastic-looking, they are nice to look at and have rounded edges to match the central unit.

The Denons speakers look more like a classic bookshelf speaker with a removable fabric grill in a wood grain cabinet.

One good feature that both of these stereos boast is Bluetooth connectivity, although, the Onkyo has an older version of Bluetooth so you may experience a little lag when using it. This stereo also has NFC connections to make connecting your wireless devices a breeze. This is a component not featured on the Denon.

Both stereos feature a nice addition to their sound quality, for the Denon D-M41 this comes in the form of a tripe noise reduction design to help you achieve the purest signal possible. The Onkyo comes equipped with a 2 mode super bass function to drive the lows more actively.

The DM-41 has great detail and a wide soundstage for such a small stereo. The presentation is very forward which could put some people off but we think it sounds great and energetic. The speakers are not picky with their placement and have a decent bass response.

The Onkyo is a little more reliant on the placement of its speakers and is a little happier being placed near a wall to get those lows pumping. With the super bass function turned on you can get some serious rumble. The soundstage is also very acceptable but loses its clarity in certain genres.

What We Like: Classic style, Noise reduction, Deep soundstage

Not So Much: No USB connection

Verdict: An awesome choice for an all-inclusive stereo with solid paired speakers that create a rich and detailed sound.

What We Like: Sleek design, Extra bass response, NFC connection

Not So Much: An older version of Bluetooth, Picky speaker placement

Verdict: This mini stereo looks great and has a nice sound to it to complement its looks. It is well worth its cost.